The Moors and Christians will be parading in Santa Pola from the 31st August to the 8th September 2019. The fiesta is held every year at this time in honour of our Lady Loreto. The fiesta includes all sorts of events like the Alicante province Archery Trophy, Carnival Parade, Ribbon Race, Sailing Regattas, Music Band Parades, Quail Shooting, Model and Radio Controlled Boat Competition, the Moors and Christians Parades, Mock Battles and Conquering of the Castle as well as daily Mascletas and three evening firework displays! The English version of the programme is:
Saturday 31st August
20:30 Grand Switch-on of Festival Lights.
22:30 Official Opening Speeches at the Auditorium in the Palm Park, followed by the inauguration of the Barracas (fiesta party headquarters)
Sunday 1st September
08:00 Reveille with fire-crackers.
10:00 Moors disembark on Levante Beach opposite the Town Hall and fire their Arquebusses (very loud guns).
12:00 Procession of the Moors and Christians Music bands starting from the Town Hall.
13:30 Mascleta (day time fire crackers) in the Explanada del Castillo.
19:00 Public appearance of Festival Captains after which the Moor Captain heads for the Marina and the Christian one to the Castle. The Moorish Envoy ask the Christians to surrender and a mock battle takes place during which the castle is attacked, surrender and then occupied by the Moors. This is followed by a parade of the Moors starting from the Marina.
Monday 2nd September
08:00 Reveille with fire-crackers.
12:00 Procession of the music bands, Moors and Christians through the streets starting from Plaza de Glorieta.
15:00 Firecrackers
19:00 Gathering of Festival Captains after which the Christian Captain heads for the Palmeral Park and the Moor one to the Castle. Mock battle takes place during which the Christians attack and reconquer the castle from the Moors. This is followed by the Christians parade from the Marina.
Tuesday 3rd September
09:00 Reveille with fire-crackers.
15:00 Firecrackers
19:30 Procession with brass bands from calle Muelle to the Palmeral Park.
20:30 Grand Parade of Moors & Christians in full custom from the Palmeral Park along calle Elche to the Plaza de Glorieta, along calle Muelle finishing at the Marina.
23:00 Street Festival in many streets around the town.
Wednesday 4th September
08:00 Reveille with fire-crackers.
12:00 Music Procession with Flutes & Drums starting from the Plaza de Glorieta.
15:00 Firecrackers
17:30 Ribbon race and games in the calle Muelle.
20:00 Theatre performance for Children in the Castle-Fortress.
Thursday 5th September
08:00 Reveille with fire-crackers.
12:00 Music Procession with Flutes & Drums starting from the Plaza de Glorieta.
13:30 Beer Bath Party at the Marina.
15:00 Firecrackers
21:30 Concert by the Coral Villa de Santa Pola at the Castle-Fortress.
23.30 CorreFocs (handheld firework display) along calle Muelle, Glorieta, Santa Isabel, San Antonio, Elche finishing in the Plaza de Glorieta at the Castle.
Friday 6th September
09:00 Reveille with fire-crackers.
12:00 Parade with the Musica Bands from the Glorieta
15:00 Firecrackers
20:30 Spectacular Carnival Parade with floats from the Palmeral Park along calle Elche to the Plaza de Glorieta and then along calle Muelle.
01.00 Firework Display from Levante Beach.
Saturday 7th September
07:00 Reveille with fire-crackers.
15:00 Firecrackers
20:00 Floral Offering to Our Lady the Virgen de Loreto in the Castle Chapel.
22:30 Concert / Serenade dedicated to Virgen de Loreto by the Coral Levantina of Santa Pola and Santa Pola Union Band of Musicians at the Castle.
01:30 Colourful fireworks and Mascleta firecrackers from the Castle
Sunday 8th September
08:45 Reveille with fire-crackers.
10:30 Singing of the traditional Motet in honour of Our Lady, by Mare De Deu band at the Castle.
13:30 Mascleta (day time fireworks and fire crackers) at the castle.
20:00 Solemn Procession of our patron saint the Virgin of Loreto from the Castle along calle Cruz , Colon, Mercado, Mayor, Angel, Elche and finishing at the Castle.
01:00 Grand Firework Display from the Levante Beach which is finished with a powerful Palmeral firework to mark the end of the Fiesta. 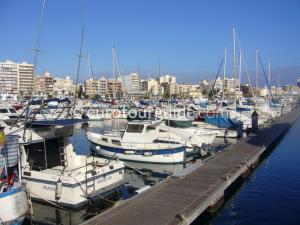