The town of Alcoy will be celebrating their patron saint, the Virgen de los Lirios. The fiesta begins in August, but the main day known as the Romeria a la Font Roja , takes place on Sunday 15th September 2019 and has been declared as being of Provincial Tourist Interest. The Romeria involves the carrying of the statue of the Virgen de los Lirios from the town of Alcoy to her sanctuary in the Font Roja Natural Park, some 12 kilometres away and several hundred meters uphill! The sanctuary is dedicated to the Virgen de los Lirios, which directly translates to the virgin of the lily bulb as the image of the Virgin Mary is said to have appeared on a lily bulb in 1653. The English translation of the programme for the Romeria a la Font Roja is:
Sunday 15th September
06:00 Desperta, early morning parade.
06:45 Transferring of the statue of the Virgen de los Lirios from the Town Hall to the Parroquia de San Mauro, then the Romeria follows the usual route up to the Sanctuary.
10:30 The statue arrives at the sanctuary and is officially received.
12:00 Mass in the Glorieta de la Font Roja, followed by a performance by the Group Casa de Andalucia and then the folk group Dansas Carrascal in the Plaza de la Ermita.
Bus Service
From 06:30 to 18:00 there is a bus service every 20 minutes from calle Santo Tomas to the sanctuary for 2€ per person. 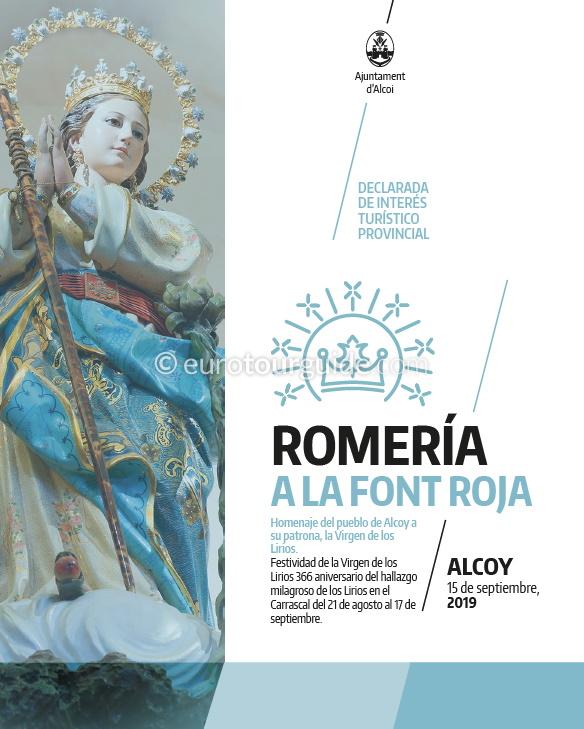